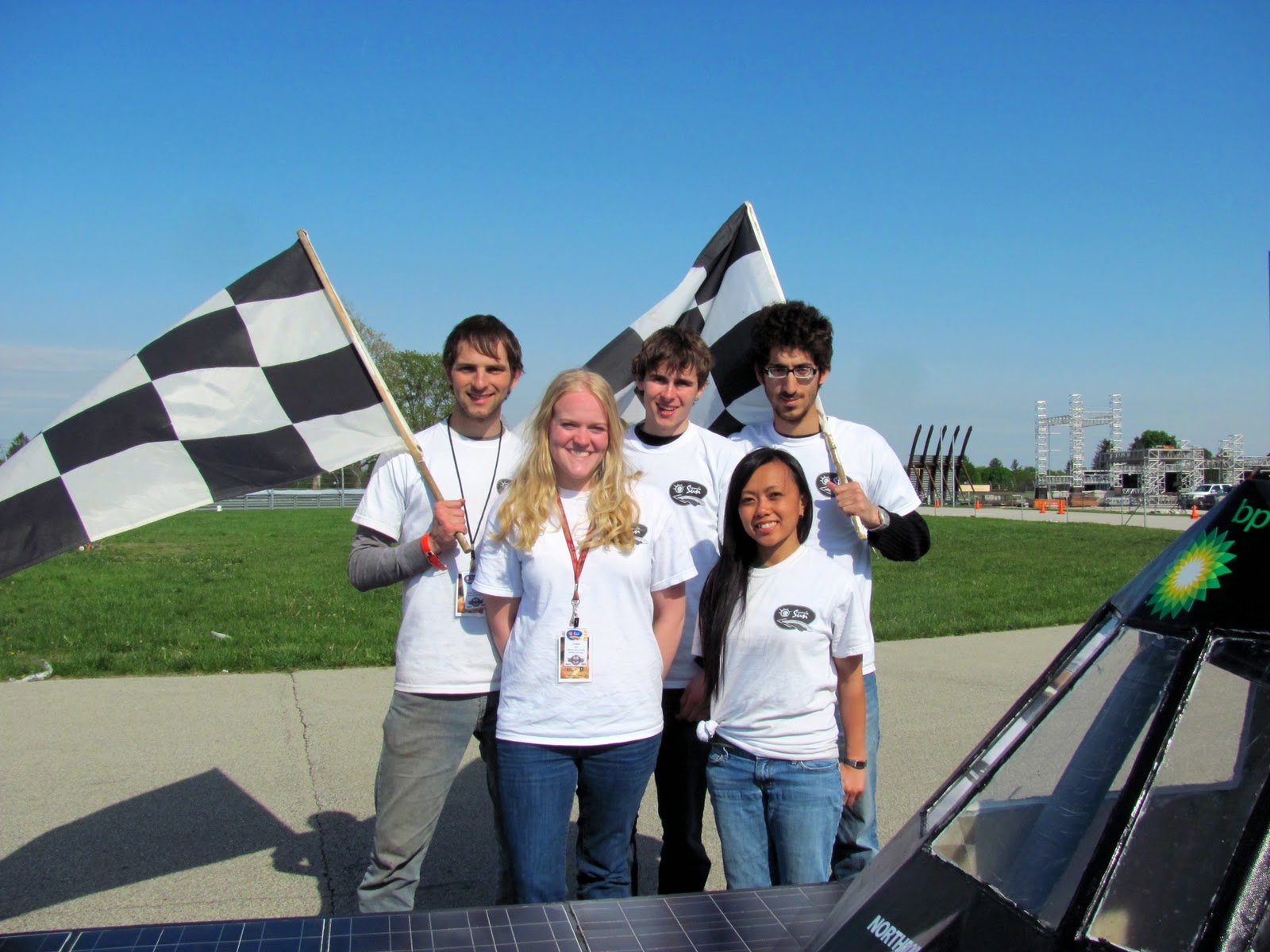 Hello and welcome to the first post of the Michigan State University Solar Car Racing Team! Eight Months ago, our team successfully competed in the Formula Sun Grand Prix for the first time in university history. Here are the final results of that race:

Not only did we complete the race, but we felt satisfied by the substantial number of laps Brasidius, our vehicle, pulled off. In the three day period, Brasidius raced nearly 200 miles without any technical malfunctions. Of course, we must absolutely stress our gratitude to the other, more mature solar teams, especially the University of Minnesota Solar Car Project and the Western Michigan Sunseeker Solar Car Team. Our car required a great deal of preparation at the race to pass scrutineering, and we certainly could not have done it without those teams.

Other teams, such as the Iowa State Solar Car Team and the Kentucky Solar Car Team, were extraordinarily helpful in explaining how specific systems within their vehicles were designed. We are finding now, as we prepare for the American Solar Challenge 2012 (more on that later), that the feedback those teams at the FSGP 2011 gave us is helping us push through design boundaries our team was limited to in the prior race (more on our current design work in later posts).

We were also greatly appreciative of the general atmosphere at the Formula Sun Grand Prix. The other teams were composed of some ridiculously talented engineers who were also friendly and open to newcomers. At the race, two of our five-member team last year, Lindsay Karn and Manila Ounsombath, who graduated in spring of 2011, were honored with the FSGP Spirit Award. Where is our team going from here? We hope to successfully race in the American Solar Challenge 2012, a biannual cross-country competition, for the first time. With over 20 teams currently registered for the competition, we must say we are intensely excited for the event. Here are the status boards for the various teams registered: Pre-event Team Status Boards

The route goes from Rochester, New York, up through Michigan (the route passes through East Lansing!), and ends in St. Paul, Minnesota.

Our primary objective in the American Solar Challenge 2012 is to complete the entire 1500 mile journey in Brasidius. This involves completely redesigning several systems within the car to allow it to race that far.
A few design improvements will be named here:

The past semester, exciting progress has been made in several fronts. The team has grown in size from under 5 members to 25 active members. Our team structure has evolved as well. In the year prior, we had 3 main teams: Electrical, Mechanical, and Business. We found that we operate more efficiently when the teams are more differentiated. There is now a frame, suspension, body, sponsorship, battery, array, and microelectronics team, each composed of between 1 and 8 members.

Because our team is still not as large as the more well-established teams, each member plays a multi-faceted role in the success of our day to day endeavors. This essentially means that individual members typically contribute to more than a single sub-team. We do this to try to minimize bottlenecks in the roles of individual sub-teams in fulfilling the goals of the whole team.

From september until early january, our team was focused primarily on design of the improvements to be made to Brasidius and the completion of the design report for ASC 2012. For instance, the body team has created over 17 iterations of a cambered airfoil design under consideration for fabrication. Here is a side view of the airfoil CAD file in relation to the frame: The frame and suspension team have completed their designs, and we are eagerly awaiting the materials for construction to arrive in the shop. Fabrication will hopefully begin within the next week of the frame, and some components of the suspension will be begin fabrication this weekend.

Here is a final picture to end this post. Here is Hasan, our Business Manager (and graphics extraordinaire!), when he unveiled to us the fantastic new logo for the MSU Solar Car Racing Team last fall.