A Photographic Journey through the ASC 2012 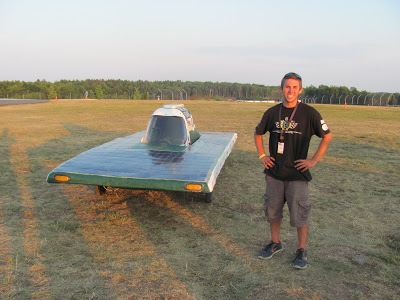 Its easy when we are caught up in the sleep deprivation, stress, and workload associated with the solar team to forget about the great times that the solar team has given us. I want to share a few of the photos that resonate with me as I reflect upon MSU’s first ever competition in the ASC 2012. The expression, “a picture is worth a thousand words”, is certainly how I personally feel about the photos you will see below.

The Oregon State University Solar Car Team was hands down the most awesome team at the competition. They were all super fun, relaxed, and nice, and they were unbelievably generous to our team. For several nights of the competition, we stayed at the vacation home that Oregon State was staying at, thanks to their much appreciated invitation. Also, Oregon State helped us with their experience and equipment to help us pass scrutineering. I can’t put into words how much respect I have for their team.

One of the great pleasures of participating in the American Solar Challenge is spending time with bright engineers from across the country (and even some from outside the US!). We very much enjoyed eating dinner with and talking solar with Western Michigan, one of the most established solar car teams in the nation.

One of the greatest assets our team had during scrutineering was an electric scooter that our logistics manager, Ethan Akerly, brought along to the race. Our trailer was a ten minute walk to the scrutineering station, so this scooter allowed members like Miles above to zip back and forth to our trailer for tools and other miscellaneous needs.

Sleep deprivation was a serious limiting factor at the competition. Multiple days of 5 hours of sleep or less started to add up by the end of the FSGP 2012!

Here is a photo of Dan with Brasidius after we successfully passed the dynamics scrutineering and realized we were going to compete in the qualifying track race. Dan was the brains and the motivator behind Brasidius’ new shell. During the summer before the race, Dan spent every night and weekend at the shop after his full-time internship constructing the shell and fastening the shell to the frame. Indeed his passion and drive for making a new solar car for the ASC 2014 has made him the ideal candidate to manage the 2-year design cycle of Leonidas!

One of the great parts of Solar Car racing is the camaraderie between different solar car teams. Oregon State and Minnesota had already passed scrutineering, so they were kind enough to replace one of our damaged arrays. Minnesota and Oregon State use EVA tape for adhering their arrays to their shells, while we used silicone, so this proved to be a valuable lesson to Steve Zajac and I.